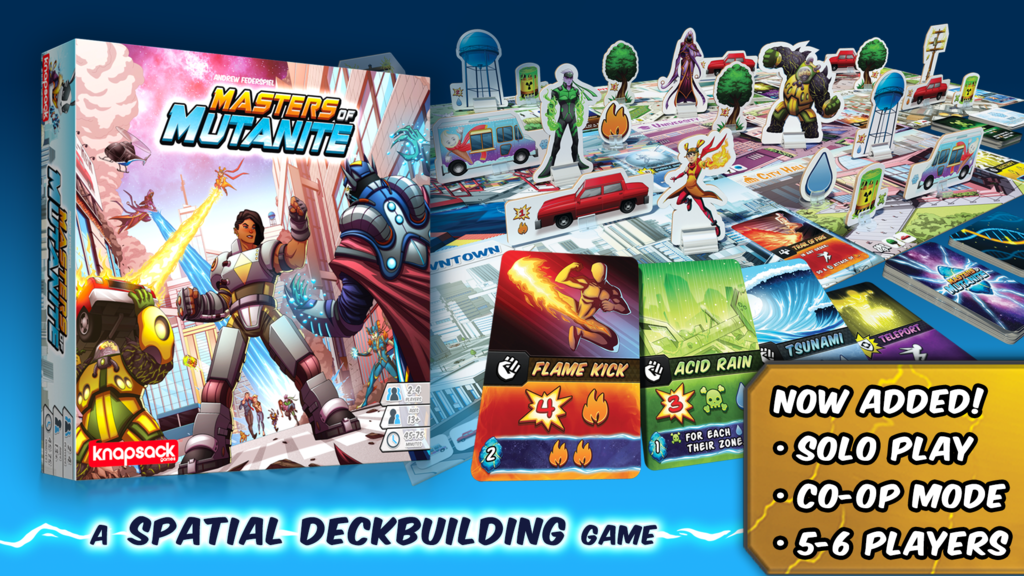 Collect superpowers around the city. Mutate your character to gain special traits. Weaponize the environment for explosive effects!

Latest Updates from Our Project:

It's been 2 months since the campaign ended. Thank you to everyone that has completed their BackerKit surveys so far, we're at 82% completion. If you have not completed your survey, please do so before April 12. If you lost your survey, get another one here.

I've been working on a bunch of additions to the rules from the content we unlocked during the campaign. I'm excited to announce that the following is playable today on Tabletop Simulator:

I would love your help testing the new content. ANY testing of the 3 additions above would be helpful. In Villain Mode, there are some player counts I haven't tested, so the villain life numbers definitely need to be balanced. Please post any feedback/questions in the campaign comments.

A lot of the rules were restructured to make those work cleanly. I've also made a bunch of other tweaks to the rules:

On some other rules topics:

I look forward to hearing your feedback, thanks!

Hi all! Happy Lunar New Year to those who celebrate!

It's been two weeks since the campaign ended, so I'm starting to send out surveys for the pledge manager. This is where you'll fill in your address, add additional copies of the game, and pay for shipping. I'm still planning for the game to ship by December, this just gives me an idea upfront how many copies I should manufacture and ship to different regions. BackerKit requires a "smoke test" of 5% surveys sent out first, so a few of you will receive surveys before the full blast goes out. If you think your address might change, you'll be able to update it through the pledge manager. It will be open through April 12, but there's a long time between April and December, so I'll likely check in again on any further address changes.

I've been working on restructuring the rules to accommodate the additions from the campaign. In addition to playtesting, actually writing out the new rules lets me wrap my head around the full implications of certain complexities. I'll let you know when I have something concrete for you to try out.

Have a great weekend! (Long weekend for those in the US!)

We did it!! Because you all believed in Mutanite, it will live to see the light of day and we'll all be able to experience the EPICNESS in person! The timing of its delivery later in the year will be wonderful, too—after Covid has waned, we can start to spend quality time with each other again, smashing each other to bits! In the meantime, if you haven't played, I encourage you to try it on Tabletop Simulator until you get your copy!

What a rollercoaster of a campaign. On Day 1 we did great. Day 2 was the US Capitol news which I think took a toll on our battle game, and for the next few days I was convinced we weren't going to recover. Then we kind of did! ...and then it slowed down big time. After you all expressed your feedback and we incorporated some great additions into the game, we started to gain traction again. Some key press also helped to keep bringing new eyes to the game. In the end, WE FUNDED! And that's what matters in the annals of history.

...that, and rocking out to the Mutanite theme song:

This unbridled enthusiasm from Dennis of BrettspielSuchties captures the spirit of the game perfectly! It's all about jumping in, picking up some sweet powers and traits, and driving ice cream trucks into your friends to make them frosty. The gameplay FEELS frictionlessly visceral and that's why I love that video.

This campaign was a ride and I am quite out of energy! So I'm going to take a break, re-energize, and mutate into post-campaign Andy that has special traits for developing 1-6 player competitive and cooperative modes. I'll make sure to keep you all updated with the goings on, and hopefully eventually put some rulesets out so you can try the new additions for yourselves. I've already started working with BackerKit on surveys, as well as talking to Matt at PandaGM about getting an updated quote after Chinese New Year.

Thank you all again. I can't wait to get this game made and into your hands!

It's the final hurrah!

Welcome to our new backers! We've unlocked Larger Zone Boards to feature the city art in its full glory! Next up is 3 Kickstarter Exclusive Power Cards if we hit $30k. Here's our status:

Any final shares on socials may get us to that $30k mark!

We did it, folks! Masters of Mutanite is FUNDED!

With all your support, and the help of some generous (!!) backers, Masters of Mutanite is going to be a reality! This is perfect timing before the 48 hour email goes out tonight to project followers.

Shout out to Foundry Game Room for tipping us over the funding goal! Go check them out!

Thank you all and let's keep marching on to those stretch goals!